It’s been a question on the minds of many: where are Keyshia Ka’oir’s kids? Did she really abandon them to live a lavish life with Gucci Mane? Will she retrieve them from Jamaica now that her life is settled here in America?

For as long as we’ve known them to be a couple, it’s never been addressed, but in recent interviews and in the latest episode of their wedding special, The Mane Event, we finally got answers to the question inquiring minds have been asking for years. For all those wanting to know, the Wopsters are indeed parents to children who are reaping the benefits of their parents’ hard labor, not in Jamaica, but under the same roof for which they lie their heads, and yes, if you’re wondering, they were all at the wedding.

Keyshia and Gucci consciously decided to keep the matters of their children private to ensure they live as normal lives as possible. Despite her pure intent, which until recently was unknown, the alleged rumors swirled around as her motherhood was questioned, but the harsh critique she experienced, stemmed simply from the result of being a famous person engaged in social media.

The Wopsters have willingly flooded our timelines with updates of Gucci’s progress and of course, their loving relationship, sporadically allowing fans into their world, if only for a few scrolls or snaps. Their sharing or oversharing has fans invested in ways only social media can permit, but among them are also unidentifiable trolls, who revel in hateful comments and fabricated storylines. 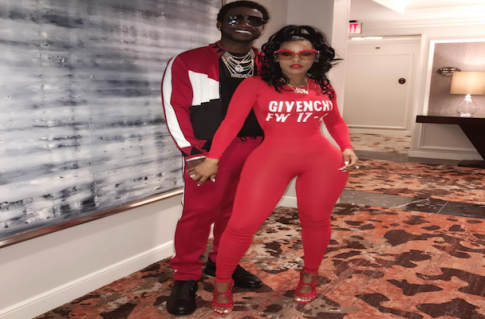 With a following that consists of lovers and haters, as do many other public figures, their frequent social media use results in expectations and demands to share more than they already have, as if fans genuinely believe they should have unlimited access to a life other than theirs.

The problem with this mentality is simple: it’s not true. As famous as one is, celebrities are entitled to their privacy, and for the most part, have control over the areas of their lives they choose not to disclose, whether it be family dinners or family members…and I believe we know this. Despite our level of impatience and curiosity, we’ve granted this familial privacy to a few of our favorites celebrities. We’ve yet to see Sierra Wilson, we still don’t know how Nas and Kelis’ son looks, and if lurkers hadn’t snuck and circulated pictures of Sir and Rumi Carter this past weekend, we would still be waiting for Beyonce to drop them. In neither of these situations was their role as a parent in question.

The difference may be that we were present to witness these pregnancies so we know their children in fact exist, and if their previous children were any indication, excluding Kelis, we know it’s only a matter of time before we’ll get to see them. On the contrary, Keyshia and Gucci’s children are children they had from previous relationships, at a time when not many knew Keyshia and Gucci was fresh on the music scene, at a time people didn’t care. They hadn’t been publicly acknowledged until recently (in radio interviews, the reality show and Gucci’s autobiography) and we know we probably won’t ever see them until they’re old enough to make that decision for themselves. Regardless of the contrast, their social media use cannot and should not take their right to privacy away. Not every celebrity needs to post pictures of their children, and the existence of these pictures shouldn’t  be a key factor in evaluating their parenting skills. In the words of Keyshia herself, “Just because I’m not on Snapchat or Instagram Live with the kids doesn’t make me less of a parent.”